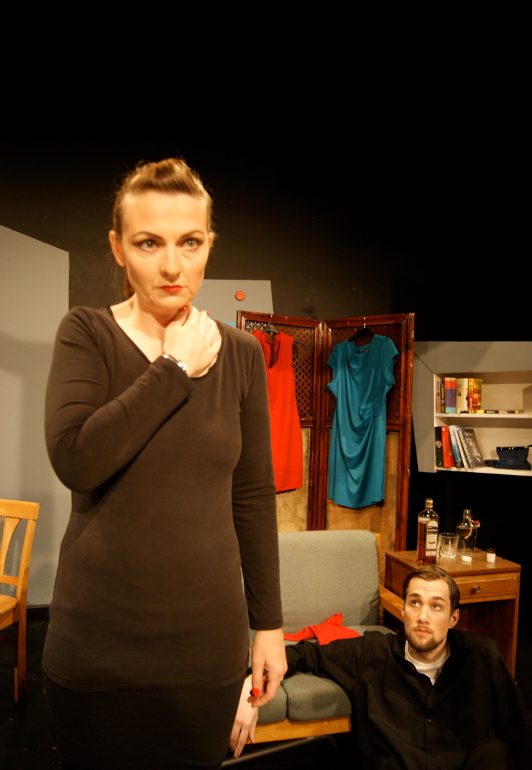 Rule Number 1: For the open couple to work properly only one part of it has to be open.”

NoRopes’ production of The Open Couple returns to the Town Hall Studio, Galway on 15-16 January after its sold out debut last August. The Open Couple is a three-hander whose fast-paced satirical style perfectly suits the Studio setting. Written by Italian Nobel laureate Dario Fo and his wife, Franca Rame, in 1983, the play has a very contemporary resonance and explores the sexual politics of a doomed ‘modern’ marriage.

Antonia (Deirdre Bhreatnach) and her husband (Daniel Cronin) mix mind games, miscommunication and emotional blackmail with hilarious consequences in this draughty, open marriage. Filled with sharp witty dialogue, this play will carry you through a bent reality of one couple’s fight for their own ideal marriage. In describing his approach to theatre, Fo claimed: “the more one approaches the new by way of experimentation, the more there is a need to seek out roots in the past.” With its use of age-old storytelling techniques to discuss controversial socio-political themes surrounding marriage, The Open Couple, in the excellent translation by Stuart Hood, is sure to engage Galway audiences and kindle their interest in Fo’s extensive body of work.

NoRopes is a new, Galway based theatre company, whose aim is to challenge our understanding of societal boundaries through the production of innovative and little known dramatic works. Director of The Open Couple Mairéad Folan said, ‘This is a great play to do as whilst it has many comic moments there is an underlying sadness to the piece.”