The Playboy of the Western World-Blue Raincoat 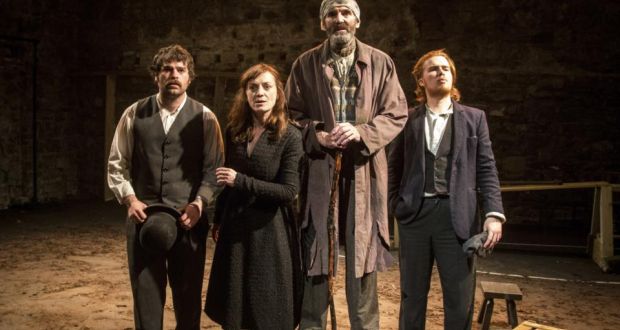 An accusation often levelled at Irish theatre, especially the canonical variety with its preoccupation with language, is that of its being merely “talking heads” disconnected from the body. The few times this reviewer had seen The Playboy of the Western World before, it seemed that the language was like a highly-strung racing horse, which springs out of the traps at Pegeen Mike’s shopping list, and demands that the actors struggle to keep up with it up to her scream at the end. The strategies they normally deploy are florid caricatures of Irishness with broad moments of physical comedy so as too keep the audience’s attention and not to unhorse themselves.

Not this production. For this reviewer, it was the first time seeing a production by Blue Raincoat, and I had more than one expectation overthrown. No frenetic Paddywhackery. But there wasn’t the stellar physical theatre promised by the company’s reputation either. I was slightly thrown myself. Joe Hunt’s gloomy strings and washing waves accompanied the fade up on Sandra O’Malley’s amazonian Pegeen Mike leaning over a single crate writing the list, in a playing space with no signifiers other than a stone wall with some objects on it, and chairs behind it where the rest of the cast where seated. John Carty’s Shawn Keogh stood at the edge, in equal parts longing and afraid as he clutched on to his hat and waited for his bride to be to register his very tangible presence.

There is nothing more magical than a production which has so much quiet confidence in itself, it doesn’t have to try. It wasn’t afraid of stillness and it didn’t have to be funny because humour came out naturally in being spoken by characters, readily recognisable from anyone’s everyday life, that had been given time to occupy space and just breathe and be. Bob Kelly’s transformation from the beleaguered Christy Mahon into the romancin’ Playboy that Pegeen Mike had always said he was was seamless and magnificent. Her realisation of this after his final rejection of her had a tragic force which justified the strong stylistic decision of keeping in her scream at the end. Martin Maguire, Barry Cullen and Brian F Devaney’s underscored this tragedy by refraining from playing their characters’ alcoholism for laughs. We were left in no doubt that Pegeen would never meet her match again.

That said, despite Fiona McGeown’s touching performance, some of the Widow Quin’s vitality got lost in the attempt to mine her humanity, and both women’s character arcs were not so clear as Christy’s. You saw the ethos behind the performance but you just wanted to see it embodied that little bit more through stronger choices. The decision to have sea sounds and music underscore the entire action sometimes distracted but overall lent an air of menace and beautifully pre-empted Pegeen’s loss. The decision to cut the girls and not to put an interval in gave the piece a wonderful sense of momentum, and allowed the audience to fully experience the piece without thinking too much about it till the end. That was when this reviewer was left scratching her head and thinking:

It felt if Ingmar Bergman had come back from the dead to direct an Irish classic. And you know what? It really, really worked.

A review of Blue Raincoat’s production of The Playboy of the Western World which played at the Town Hall Theatre in Galway from 29th to 31st October.Written by J.M. Synge.