The wolves are circling in ‘Gondla’ at the Town Hall 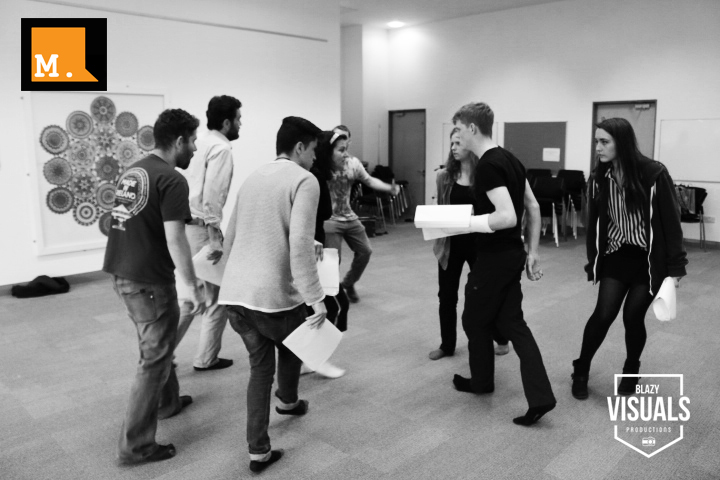 “…I am drunk on the wine

Of grace, and ready for death.

I am coin. The Creator buys

Through me the salvation of wolves.” -Gondla

Gondla, an Irishman, is to be married to the Icelandic King’s foster child, in order to unite the two kingdoms. However, jealousy rears its ugly head within the king’s circle of royals, and a pack of malicious “wolves” set out to bring Gondla down. So sets the scene for an ambitious undertaking for a new Galway ensemble under the direction of Luke Morgan.

The original play was written by Nikolay Gumilyov, one of Russia’s most famous poets and war heroes,  and published in Russia in 1917. By August 1921, Russia’s Bolshevik government had executed Gumilyov on a charge of counter-revolutionary activity and Gondla was somewhat lost in furrows of time. Gondla was to remain a special play in Gumilyov’s cannon of theatre works. The play is both a fable set in the realm of legend and at the same time, the subject matter is as real as real gets – a poet pleading under the shadow of death for a civilization of justice and love.

“Gumilyov originally approached a French producer to make the play, however Gumilyov decided not  to go ahead with it as the producer wanted to make a lot of changes. We have stuck to the original script and are truly working to Gondla as Gumilyov would have wanted.” says producer Tim Meaney. This will be Meaney productions first theatre outing, previously working more in film production. Its some undertaking with not only a national tour taking place around the country,  but also the fact that the show has a ten strong ensemble cast. He tells me “the cast are feeling really excited as it has been a long time coming for them but they feel good about it and the Luke has done a great job working with them”.

The show has brought together an all star cast under Morgan’s direction, as well some of Galway’s latest emerging talent. The production has some of Galway city’s more veteran actors of recent years including Neil de Bairead(Grubbe) and Yvonne Lydon(Lera) as well as emerging talent from NUIG’s drama department in the form of leading man Cillian Browne (Gondla) and Katie Reid(Warrior 3). The show also features a special live score composed, arranged and conducted by Jake Morgan, who’s work is performed regularly by orchestras around the world.

Given the enormous cuts to arts in recent years, the large numbers of actors and creatives workers immigrating, and the dole pushing people onto jobs bridges that make no sense, its great to see a company brave enough to undertake such a large-scale epic. As Arts Council funding began to cut dramatically after 2008, we’ve seen a rise in the show-in-a-bag style shows with few performers, less investment in set, costume or score and a loss of faith in the power of old world legends to shape how we see our society today.

This is an ancient story that carries a contemporary meaning combining the realms of spirituality, the dark sides of political systems and the tender love story trying to prevail through it all. ‘Gondla’ is an allegory about the state of Europe in the 20th century and was seen as subversive enough for its time to be subdued. Will it stand the test of time in the Town Hall Theatre this weekend?

Translated from the original by Philip McDonagh.