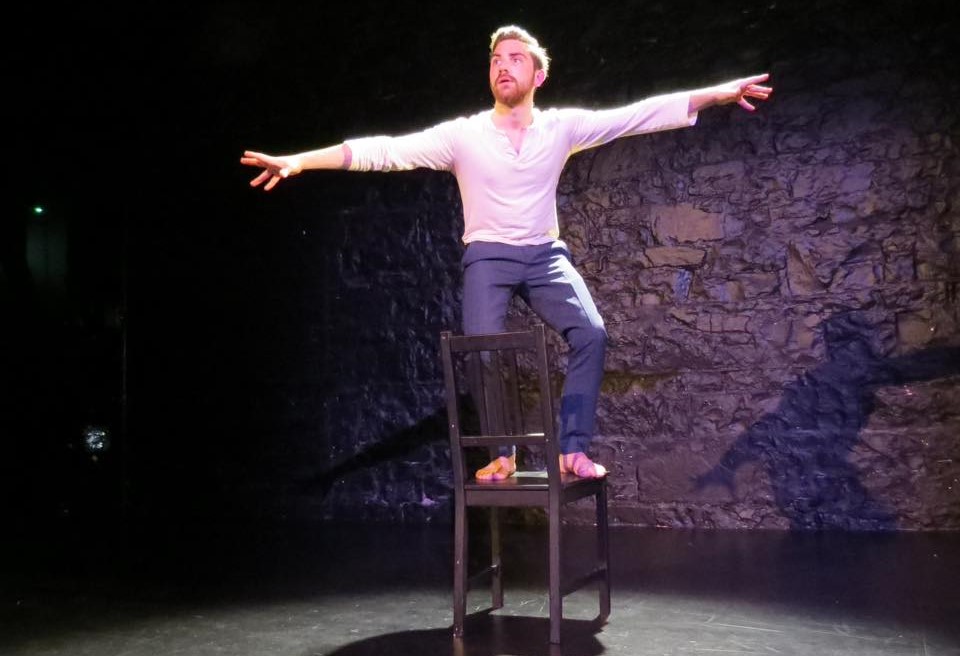 As performers, we are trained to take direction, to be malleable and open to new ideas. That being said, we also have to make choices that are in line with our own interpretation of a piece.

In my experience as a theatre performer, I am often used to having someone act as a director, someone with an outside-eye who leads us in the right direction, or at least the direction that fulfills their vision. Even when working within an ensemble, where all performers are coincidentally directors and equal in theatrical hierarchy, there is always someone that can step out of of the performance to have a “directorial” look at the piece.

So, when I started working on Blood On The Moon, a play for one actor, during my Masters, and more recently performed for the Galway Theatre Festival, I found myself without a director. Thus, I had to take on that role.

I didn’t choose to self-direct. In fact, when I first started working on the piece, I had a few people in mind whom I wanted to take on the role of director. But as Masters go, all of them became very quickly involved in their own dissertation projects, and thus began my quest to explore the world of solo creation and self direction.

WTH IS A SOLO CREATOR?

Let’s make something clear: I did not create Blood On The Moon. The play-text was written by Canadian playwright (and stand-up comedian) Pierre Brault. He is also the original performer, and (Fun Fact!) he taught me playwriting in theatre school. So even though I didn’t create the play, having played the role of the director as well, I can claim a certain level of authorship over this performance since I created or devised the physicality within the piece, which made this performance unique.

So, what do I entail when I say “solo creator”? Well, when performing a play for one actor, with no director, no outside eye, no stage manager (until tech week), it is up to the performer to wear all of the missing hats. The solo creator is responsible for the dramaturgy, the devising of physicality, the blocking, the performer’s choices (his own), and on this occasion, the producing of the show, as well.

DISCIPLINE IS YOUR FRIEND

One of the biggest challenges, and most obvious differences in self-directing is the discipline required in order to put a show on its feet. There is no one there to hold the performer  (or director) accountable. True, it is nice to be in charge of your own schedule, but the temptation to relax, or to take a day off “because I’ve been rehearsing for 7 days, now”, or to stay in bed a little while longer, or to not learn your lines is immense. “If no one is there to watch over me, I can do whatever the hell I want, right?!”

Wrong. Time doesn’t stop when you take a day off. That’s one less day, and now double the work there is to do tomorrow. That doesn’t mean that you shouldn’t take a day off – because you should for your own sanity’s sake – but if you’re playing the role of the director, performer, and dramaturg, you may as well play the role of the stage manager and schedule your rehearsals accordingly.

Furthermore, having a level of discipline within the rehearsal room is just as important. Every performer that I know has a routine before rehearsals. Mine includes having a cigarette, a coffee, 20 minutes of physical warm-up, 10 minutes of voice warm, and 30 minutes of character warm-up. These last 30 minutes involved walking around the room, and interacting with the space while switching from one character to the next.

It is incredible the amount of self-discipline you develop within a 4-week rehearsal period when you are working on your own. If you are able to hold yourself accountable for anything, your excuses for procrastinating diminishes greatly, and suddenly, you just get shit done – and you want to get shit done.

Like most devising processes, devising physical theatre (even by one’s self) starts off with creative improvisation exercises. The only difference in this case, is the discipline that is required by the performer-director, to lead themselves through these exercises, and being able to step out of one’s self while performing, to look at the piece(s) from the outside. What works? What doesn’t? What feels right? Can I push this further?

For example, the play comprises of 18 different characters, all of which are very real to me. But how could I make them real to the audience? Well, by deconstructing the text, and using hints the playwright left in his play, I was able to establish specific behavioural characteristics and personality traits for each character – which was helpful to structure my character development, and transpose each trait into movement and/or physicality patterns (using Commedia del’ Arte as one source of inspiration).

HUMAN ENERGY & THE FEELING OF SPECTATORSHIP

Okay! So I’ve already established that when solo creating and self-directing, the actor, when performing, must always step out of themselves and be the director as well – which makes things extremely difficult, especially when the performer must stay present.

A few have suggested that having a camera in the room, recording each run, is a good option, as it allows the performer-director to strictly be the performer for the time of the run, and put on their director’s hat afterwards, as they watch the footage. True that may be, but I found it to be slightly restricting scheduling-wise, as half the time is spent performing, and the other half is spent watching yourself – which is never pleasant.

When I was rehearsing/self-directing Blood On The Moon, I often felt like I wasn’t in a performative mode, that I was talking to a wall – literally. As a performer, you want to open yourself to the audience and the energy they send off, especially in a one-man show, where the 4th wall is broken. But when there isn’t event a director in the room, the feeling of performance and the energy quickly go away.

Therefore, it was important to occasionally allow others in the room, not only to allow myself to feed off their energy, but also to open the floor afterwards for feedback, where I could ask them technical questions, and they would be free to tell me what they thought of the show.

There is something to be said from having other physical bodies in the room watching. The feeling of spectatorship.

These “work-in-progress” showings or closed-rehearsals became an important factor to the entire self-directing process, as it allowed someone else to be the outside eye, and give me different perspectives. Without them, I would have gotten stuck in my own head.

On that note, I thank everyone who has helped me put Blood On The Moon on its feet by allocating me 1 or 2 hours of their time to watch me fuck-up, and ramble on for 75 minutes, pretending to be 18 different people.

I’m not particularly rushed to hop on a new self-directing project, although I am extremely glad to have taken on the challenge. The experience of performing solo can be lonely, and even more so if you are solo creating and self directing. I will be glad to focus on single roles again, working solely as a performer or choreographer or director for the near future.

If you’ve had the opportunity to self-direct, or have any questions, I’m happy to talk further about the whole experience! Just give Brick Wall Theatre a shout!