Time to rewind the Tape with Fregoli… 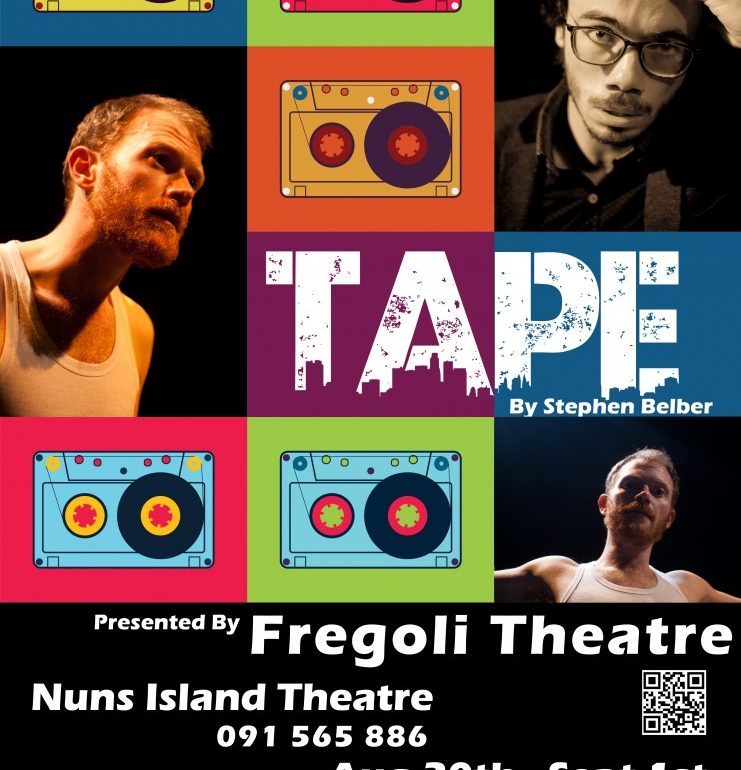 As Fregoli approach their 10th birthday next year, the company are going back to re-visit one of their most well received productions.

Tape by Stephen Belber is a story that enters on three former school friends who are reunited through strange circumstances in a motel room. The action occurs over one night and differing perceptions of past events are called into question.

Jon, an aspiring filmmaker on the verge of hitting it big, hooks up for the weekend with his best friend from high school, Vince, a volunteer fireman who makes his money selling dope. Jon’s new film is being shown at a festival and Vince has come from to see it. Over the course of the evening, Vince finally gets Jon to discuss dark events that occurred ten years previous—only then to reveal that he’s taped their entire conversation. The play toys with the concept of memory; how malleable it is and how it can change over time to suit our needs.  What we perceive a certain memory to be is not necessarily what we remember, and Tape not only walks that fine line, but dares to explore it further. Beneath its suspenseful, high-stakes surface, TAPE examines questions of motive, memory, truth and perception.

Fregoli first performed the play at the Edinburgh Fringe in 2008, receiving a 5 star review from the leading Fringe review hub Three Weeks. When asked why Fregoli were re-visiting the play at this time company member Eimear Killmartin told Ait Eile-  “Mainly because it is a great play. The subject matter and themes are universal and timelessly relevant. We have a new group of actors now to re explore and given the five star review we received back in 2008 we don’t think it got the run it deserved. Now is our chance. “

Fregoli take their name from Leopold Fregoli: The world’s most famous impersonator and an element of his character style is evident in all their work. Fregoli syndrome is also a rare disorder in which a person holds a delusional belief that different people are in fact a single person who changes appearance or is in disguise. This production will see the company’s ethos in full swing where characters and relationships have much more going on underneath the surface and nothing is as it seems.

In the last few years the company have become increasingly more focused on original work and that of new young writers. Their production of ‘Pleasure Ground’ by Jarlath Tivnan this time last year packed out the MainStage at Town Hall on more than one occasion and saw the company launched into the hearts of many Galwegians. This production was the first to receive the Mike Diskin Bursary which aimed to support emerging independent artists in the city. Though they have had a steady fanbase growing for many years within the theatre community in Galway city, their national tours have increased the company’s profile and they have become a household name. The have been a regular fixture at the Galway Theatre Festival and have performed at Festival’s such as the Edinburgh Fringe and Electric Picnic. When asked about the coming months for the company  Kilmartin tells us “To finish off 2016 we will bring Tape to Smock Alley in Dublin December 6th and 7th. And of course we have something up our sleeves for 2017 but we’ll keep a hat on that for now.”

Fregoli is one of Galway’s finest theatrical jems, to see them return to Nun’s Island where so many of their best productions have taken place, is reel treat. You won’t find this Tape in Bell Book and Candle or at the back of Charlie Byrnes, so get your asses down to Nun’s Island from 30th Aug- 1st Sept at 8pm nightly.

“…TAPE is terrific…Belber has expert fun torturing his characters with the things that never get said, yet the language is uniquely telling and the underlying grief shines through.” —The New Yorker.

“TAPE is a sordid and beautiful take on human relationships.” —Show Business Weekly.

“It never lost my attention…….the acting and directing were truly exceptional’ ***** Review of Fregoli’s  Tape at Edinburgh Fringe 2008 by Three Weeks