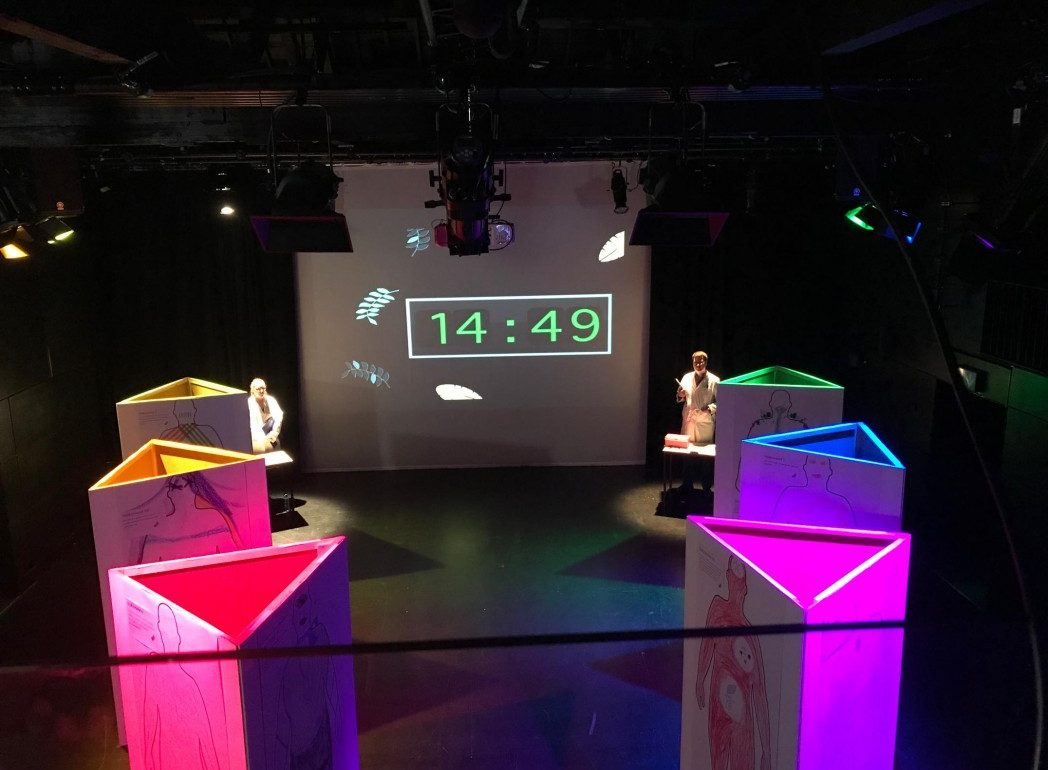 “Welcome to Two Truths, theatre you can win.” This is the first line in the programme for Two Truths, a theatrical experiment which blends the mechanics of theatre and live action roleplaying games to great effect, as well as great affect. Created by NUIG PhD candidate Sarah Hoover, the event gives an audience the chance to decide the political fate of Ireland over the next ten years. Two Truths acts as a malleable framework for a whole host of possible outcomes, generating unique conversations about the political direction of our country into the future.

From the moment you get your ticket, it is clear there is a process at work; you are guided to a white-coated facilitator who outlines the rules of engagement, assigns you a badge with an ID number and colour and verifies your consent to partake in the show by signing a permission slip. This giving of consent acts as a clever, tangible substitute for the theatrical contract, the idea that by entering a theatre space you are already agreeing to certain ideas of decorum and where you direct your attention.

The quiet excitement generated by this step was surprising, naturally encouraging people to discuss what it was they had just signed up to and what we were about to see. Some jokes are thrown around about this being our own Hunger Games and we share laughs to quell any unease that might be in the air. I feel genuinely excited for what I’m about to experience. We’ve consented to the rules. Now it’s time to play the game.

Writing a review for this is a slightly divided task, as giving away too much about the experience will lessen it for others. Its immediacy and unexpectedness is its strength. Suffice to say, once in the space, the full rules of the game are recapped and space is created for how much one is willing to engage with it. By the end of the game, 5 “truths” will have been chosen out of a plethora of statements placed throughout the space. These decide the direction of our fictional Ireland.

With a time limit per round, slight chaos ensues, but the order that emerges from this chaos is fascinating to watch. Some people occupy the roles of mediators and spokespeople, others have dynamic conversations about healthcare and bodily autonomy, while others prefer to keep to themselves and come to their own decisions. The lighting-fast ways in which individuals become collectives speaks volumes of how we operate beyond the walls of the theatre space as communities and institutions. The slick and succinct interface of this theatrical game makes it immediately enjoyable to navigate but allows its content to be deeply considered at its end.

My only qualm of the event was that I wanted it to go on longer! While the time limits per round do invite a slight crazed glee, something one might argue makes the decision-making more instinctual than considered, I found the game had come to an end just as we were getting into the meat of it. Also, having a theatrical background myself allowed me to dive into proceedings, but for those more softly spoken or initially unwilling to participate, it may be difficult for them to voice their opinions. However, this also adds diversity to the audience’s approach, perhaps showing the method in the madness.

It might also be worth considering a kind of facilitated talk post-show and to incorporate this into its running time. I found myself excited to discuss the event with those I had experienced it with and left the space with synapses firing. Digging deeper into why people made the choices they did and played the roles they did would be a welcome exercise in curiosity and would generate further involved discussion.

Two Truths is a participatory event that will never yield the exact circumstances or results twice. The excitement and curiosity it garners propels discussions on political and national identity – no mean feat considering the slightly less than an hour running time. Hoover has created a bitesize theatre experience that leaves an entirely welcome aftertaste and would only encourage repeat helpings.

Catch Two Truths in the O’Donoghue Theatre at NUI Galway for the Galway Theatre Festival from May 5th – 7th at 2pm. You won’t regret it.