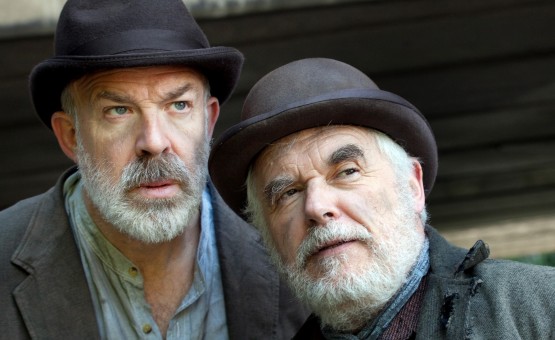 Tagline: London Classic Theatre take on Beckett’s absurdist masterpiece Waiting for Godot with a production that is polished, tame, but not quite as creative as its own set design.

“We are all born mad. Some remain so”, says Estragon (played by Richard Heap) near the end of the second act. At this point, audience members who have never been exposed to the play before are beginning to realise that Godot, whoever he is, is not going to show up. However, we’re all happy to wait with both Vladimir and his counterpart for another while; even beyond the final curtain call.

While this, in part, is due Beckett’s language, it is mostly down to the genuine and loveable dynamic between the two leading men, Cadden and Heap. The duo, with starkly different English dialects, pounce from stepping stone to stepping stone with playful abandon. This play belongs to them; and as long as they are speaking, it is in safe hands.

When Pozzo and Lucky enter, the balance is upset somewhat. Pozzo (played by Jonathan Ashley) roars nearly every line and consumes the rest of the action with an overbearing presence. Effectively intimidating at first, Ashley’s performance quickly becomes predictable and repetitive.

But the biggest problem is the use (or lack thereof) of the production’s most impressive feature: the set. The back wall is draped with old mirrors. In an original twist, trees hang from the ceiling so that it is their roots that are visible, not their heads. The stage floor is dotted with stepping stones that serve as the platform for all the action. It all looks like something out of a painting by Salvador Dali.

Despite this, it feels wrong. Maybe because it’s wasted somewhat (the trees aren’t touched, nor are the mirrors – the stepping stones restrict the space), but more likely is that the performances, as a whole, are pretty tame. The direction lacks the absurd energy of the writing and the set. Only one moment stands out as being positively electric, and that is Lucky’s thinking monologue (played by Michael Keane). Here, the three other characters tremble, whimper, scratch themselves, pick up the speaker, twirl him about, scream and thrash. The crescendo is so brilliantly mapped and performed, I can hear the heart-thump of the woman beside me. It’s no surprise the auditorium bursts into applause after Keane finishes.

Two things Cabot does get right are rhythm and tone. The exchanges between Heap and Cadden are expertly timed, and flow well. The delivery of the material is comedic, with not too much emphasis on the profound. A less experienced director might have accompanied lines like “to every man his little cross” with a stare into the distance – like something out of the angelus – but that is not the case here. Beckett, I suspect, would be glad.

Overall, it’s enjoyable and accessible. The performances play it safe, meaning that they feel a little out-of-place in front of a wacky and innovative set. Having said this, Heap and Cadden bring complexity and a hugely likeable dimension to their characters, resulting in a duo that is more than the sum of its parts. Godot can take as long as he likes; waiting isn’t usually this entertaining.

WAITING FOR GODOT by Samuel Beckett