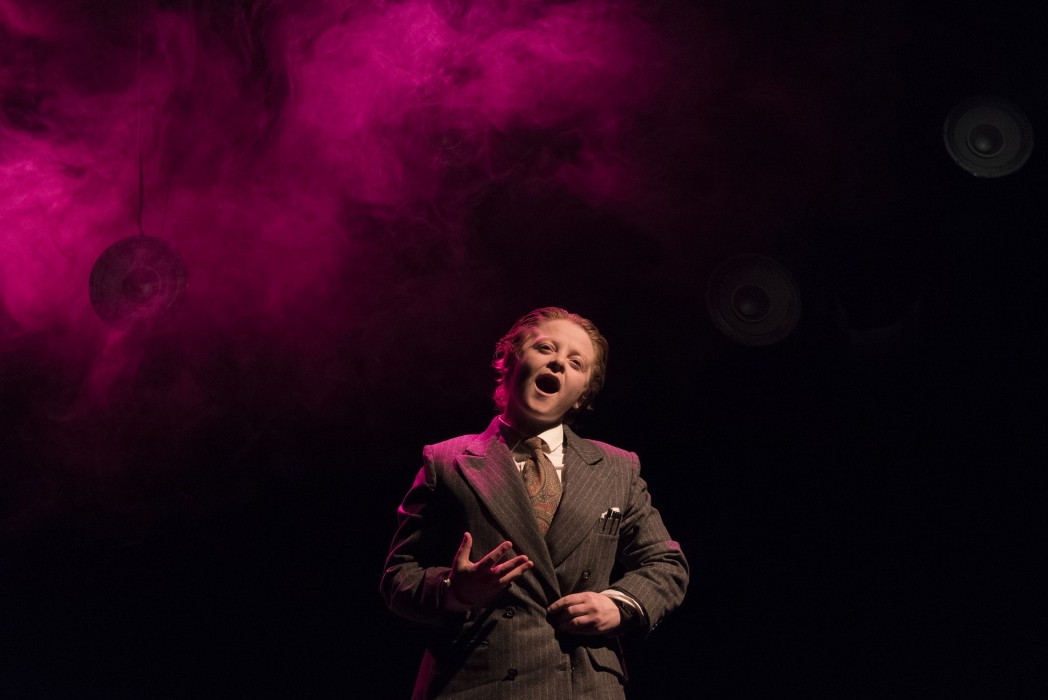 With What Good is Looking Well When You’re Rotten on the Inside?, writer and performer Emma O’ Grady announces herself and her creative team as a force of Irish theatre to be reckoned with.

The 80 minute show focuses on O’Grady’s paternal grandfather, Paddy O’Grady, and the tape recordings he made of himself sharing memories and telling stories a month before he died. The show deftly handles the complexities of performing a life on stage, making you feel as if you know Paddy intimately while also keeping him at a distance, someone who is as much a symbol as he was a living man. This sense of knowing and not-knowing permeates the entire play. Much like the compelling set design by O’Grady and Rob Moloney, I felt suspended above the whole experience, drifting through past and present, bearing witness to a life and its significance in the present day. The show is a held breath, and a beautifully crafted one at that.

From the outset, when O’Grady introduces herself, she qualifies who she is by stating her profession, and through subtly explosive writing, she explains what that means. We hear the fact, and then its significance. This continues throughout the show, by highlighting its artifice. The familiar looking set of your grandparents living room is surrounded by on-stage lights and hanging speakers. Sinéad Cormack functions seamlessly as both stage manager and actor, setting up the stage and then performing on it. You think you know something and then it changes. It serves as an apt frame for Paddy’s life on tape – you both hear the story, but wonder why he chose to tell this story in particular. In the same way that O’Grady channels versions of Paddy on stage in her performance, expertly helped by Triona Lillis’s exquisite costume design, what version of himself was Paddy creating through these tapes?

But it’s not all as serious as I’m making it sound. The old idiom of cooks spoiling a broth does not apply here, the 5 separate directors working in harmony to create a story that flows with skill and precision. O’Grady herself, Jonathon Gunning, Catherine Ireton, Caroline Lynch and Andy Smith chart the course of a life with a light but definite touch, allowing a wealth of humour and emotion to come to the fore. Eoin Winning’s lighting design also serves a functional role of deftly transitioning between scenes, while also creating a dynamic dreamlike space; a particular scene evoking a cabaret stage being particularly striking.

The show tells the story, or rather, stories about Paddy O’Grady, but also questions storytelling itself. How do we tell them without reducing people to just that story, to a single way of viewing their experience? O’Grady has helped to answer that question with this staging. The flowers that populate the stage are reminders of celebration, but also of mourning. People are introduced by their function, and then what that role means. Paddy was both a civil servant, and a playwright. He was a silent, but not quiet, man. He was an expressive person that rarely spoke, except for to a tape recorder.

What Good is Looking Well When You’re Rotten on the Inside? is an intelligent and masterfully crafted piece of theatre that deals with the complexity of emotion, personalities and legacy, but in an accessible and relatable way. Paddy both lives and dies on stage with every mention of his name, as we both get to know him, while at the same time realising that we’ll never get to know him. O’Grady and her team have made a playwright of her grandfather, and in the process have created a show that’s quite “a dish”, you might say.


What Good… is currently on an Irish tour, so make sure to check our local venues to see when it’s playing. Check out a trailer for the show here.